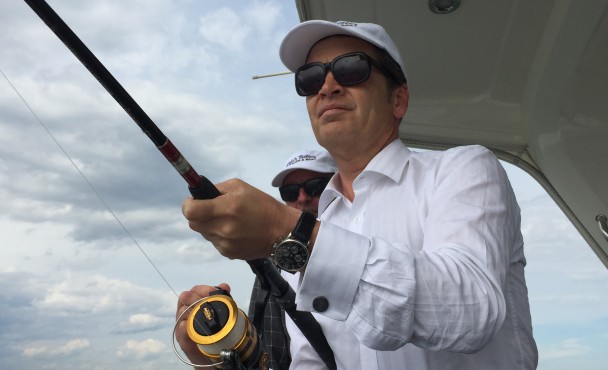 Pleasure Cruising Club snapper fishing adventures for members is a great way to entertain clients on the bay. Snappers are biting in Port Phillip Bay in Melbourne. The  Riviera M400 Sport Cruiser  are well equipped to go snapper fishing in the bay with bait boards, refrigeration and air conditioning plus proper amenities.  To catch snappers, the secret is to be out on the bay at sunrise or sunset. Our resident expert Daniel knows where to go helps our members and their guest catch snapper. 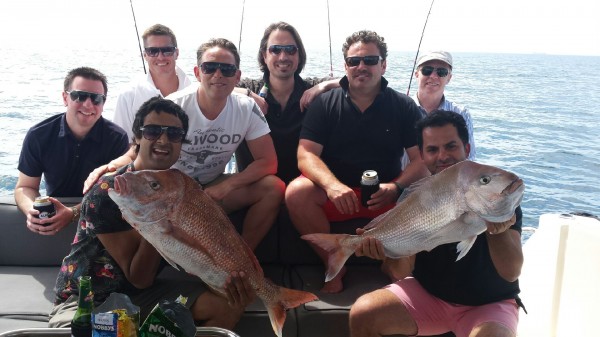 If you are like most of us who work all week long and get only a day or two weekly to go fishing, why on earth would you head out on the water without knowing if you are in the right area? There is a simple and very effective way to find out the most up to date info on any fish species you plan to catch. The local tackle store is the answer.

The local tackle store should be your very first port of call, and we don’t just mean get your bait and hooks. Quite simply, there is no better place to get the right information on where you should be fishing. The staff there are getting timely reports on where the fish are biting and what baits and tides are best. A few minutes spent asking questions can have you confidently heading in the right direction from the outset. They have a vested interest in helping you to be successful.

Anglers, who keep an eye on tides and the moon phases, definitely increase the amount of fishes they catch. Each location can be different, but the prime for fishing is usually 2 hours for both before and after a tide change. Remember, though, a fish is a fish. Often times, fishes  feed when they feel like it. Early in the season in Port Phillip Bay, we often have good fishing outcome during the middle of the tide, for some reasons.

Moon phase also plays an important role in the behaviour and feeding habits of snapper, and all fishes for that matter. Generally, a building or ‘waxing’ moon is a great time to be fishing, especially the week leading up to the full moon. Good fishing can also continue for the week after that moon phase. However, snappers  go very quiet on the day and night of the full moon.

Other prime times are around the new moon. This period  has often produced some excellent fishing. Be aware that snappers can be caught in different areas on different moon phases. For example, we have spots where fishing is successful during the full moon but are no good on the new moon, and vice versa. Again, all this is learned over time and by recording results in a diary.

Standard snapper tackle in Port Phillip Bay revolves around a 7-7’6” rod, rated at 6-8kg with a light tip and powerful butt section, matched to an overhead or a suitable spinning reel. Our number one choice in snapper reels is the Shimano 4500 Baitrunner. Ideally, the reel needs to be capable of holding 250m of 10kg monofilament line. The length in the rod is primarily for casting baits a long distance away from the boat. However, it also helps in hooking and fighting the fish.

In the tidal waters of Western Port, gear generally needs to be heavier. Rods should be rated around 10-15kg and overhead reels are a popular choice when matched with braided lines, which makes it easier to fish the strong tides. Braid also means you can get away with using smaller sinkers, feel the bites better and have improved hooking ability in deep waters.

The main bit of advice with hooks is to use the best ones you can afford. Stick to good quality brands such as Gamakatsu or Owner. They are far sharper, thinner and stronger than other brands. They can definitely help hook more fish.

Good hooks for snappers are the suicide patterns in the 4/0–7/0 size, depending on the baits being used. Circle hooks are also becoming very popular and for a good reason, they offer a great mouth hook-up rate. They cause less damage to the fish and make it easier to release them in suitable condition.

Other bits and pieces you will need vary depending on your location, from a range of small ball sinkers for Port Phillip Bay to a range of heavy bomb sinkers  for Western Port. In addition,  you will need small but strong swivels, in either crane or barrel style, as they work far better than the rolling type.

Having your rods in the correct type of rod holder is a big part of being successful with snapper fishing. Having a proper ‘snapper rack’ is very important, as it brings the rods sitting close to horizontal to the water. This helps in keeping the rods spread out and it is far more effective for hooking fish than having the rod in an upright rod holder.

Because of the low angle of the rod, the tip only has to fold away slightly before the main strength in the rod takes over. This also puts the pull of the line more directly onto the reel, causing the pre-set drag to help hook the fish.

These days, the majority of anglers fish with reels in gear and set at ‘strike drag’.  Why?  As the fish swims off with the bait, the rod buckles over and the fish is hooked! Despite of it,  many anglers still want to have the Baitrunner system on their reels, which is perfect when the fishes are timid or with the use of big baits. This allows the fish to swim off with the bait, allowing it more time to swallow the latter.

If you don’t have a Baitrunner style of reel, you can easily put a rubber band around the rod handle, leave the bail open on the reel and tuck the line under it. Then, when the fish bites, it pops free of the band and the snapper can take line under no tension, at all.

Tip 8: The wonders of Wind

It’s amazing how wind can affect fish behaviour. And snappers are no different. If you’re serious about catching a snapper, there is probably no better time than after a strong southwest wind has blown for a few days. Just as the wind begins to back off, the snappers feed aggressively, often in shallow water.

On the opposite end of the scale, easterly winds are widely known for putting snappers off the bite as quickly as they start. This probably has more to do with the associated air pressure rather than the actual wind direction. While the fishing may slow down, for the persistent angler, it can be a really good time to target a large snapper in shallower water. While the bites may not come hand over fist, the quality of the fish will make up for it.

So many anglers seem to think snapper fishing is a race. Who can catch the most? If you really want to have fun, take out some light tackle and try catching a 4kg snapper on your whiting rod. It’s heaps of fun. The fight lasts a lot longer and for sure, you will remember it.

Best of all, when the fishes are timid, you will catch far more snappers on the lighter outfits than in heavier tackle.

It doesn’t matter how good your memory is. No one can remember all the finer details that made a particular trip successful. So, it really pays to keep a diary.

Record every trip, even the ones when you don’t have a catch. Note down all relevant information including wind direction, water temperature, fish caught, baits and lures used, and part of the tide you fished.

Good reports from other anglers and discovered reliable details are also worth recording to add to the information stockpile.

The more information you can detail, the more beneficial it will be. When you look back over certain months a year or two later, you will see definite patterns.

So, there you have it. Hopefully, all information will help novice anglers get some snappers into their boats this season. Now, you’ve no excuse not to get out there.

The ultimate way to go snapper fishing in Melbourne is on a luxury Riviera Sports Cruiser.